Tong church is hosting Heritage Open Days from Friday 10th to Sunday 19th of September.  Tours are available on both Saturday mornings at 11:00 and on Wednesday afternoon at 2:30.

We are open again for our regular services at the usual times.  For those who do not wish to attend a service you can usually watch a video of the service, available from:  St Andrew’s Church, Shifnal web site:  http://www.standrewschurchshifnal.org.uk/index.html
Or directly from the Church’s YouTube channel:   https://www.youtube.com/channel/UClmI-zjbFRp8A6VcAyp5mXA

When visiting the church

When the church is open we welcome all visitors and hope you will enjoy the peace and beauty of our church again. You are at liberty to take photos.

Only the main door will be open with sanitiser available.  Most of the pews will be roped off but two will be accessible to sit in.

Unfortunately all the hymn books, Bibles, tourist literature and toys will have been removed; the Visitors’ Book too, and we especially hope that everyone will sign in on Facebook instead and leave any messages.

We ask all visitors to be very careful about what they touch and there will be anti-bacterial wipes available to wipe down for people who come after, but despite all these restrictions we hope you will enjoy all there is to offer.

There have been two weddings postponed during the past three months and a Baptism. However funerals with limited numbers are now a possibility within the building.

This information will be updated as rules become clearer.

Please note.  Each month’s news is prepared well in advance. If events do not pan out as indicated we do not edit the news page to reflect such changes.

The Tong Tours on the first Saturdays of each month at 11.00 only take place in British Summer Time, so October is the last one until April. Anyone is welcome for a full historical tour at £5 a head.

The Memorial Service always comes at the time of year when we REMEMBER – firstly the Saints, our inspiration to lead a Christian life, then ALL SOULS (2nd November) our dear beloved dead, and then the Armistice and Remembrance Sunday. On 31st October, All Saints’ Eve ( All Hallows’ Eve, hence Hallowe’en) we will hold our service to remember those who have gone before us and pray for God’s care for them. Please list the names you want mentioned on the list just inside the church from 24th October ( legibly please!)

At the beginning of September we went to York and took a guided tour of the city. A small door on the north side of one of the churches was pointed out to us as being the Devil’s Door. In medieval times, when a child was baptised, a prayer of exorcism (otherwise called ‘deliverance’) was said, and it was believed that any evil spirits would then leave the baby, but it was imperative that they should not hang around the church or the gathered people, so there was a door near the font which was kept open during the service for Satan and his minions to depart. I understand now why very young infants were baptised, not only because so many died young, but also because the people didn’t want their child to grow up with any deformity of body, mind or soul which they might then impute to the evil influence of unholy spirits.

The north was considered to be where the Devil and lesser demons resided, and in old churches the north side was often not consecrated for burials.At Tong we have blocked up door on the north side (above left) which has always been called the Door of Excommunication. It makes more sense to me that it is in fact a Devil’s door, close to the font on the north side. The only other place of burial there is a grave for unbaptised infants and suicides (above right). Like other medieval churches, it would have been blocked up at the Reformation.

To this day we say this prayer at Baptism “ May almighty God deliver you from the powers of darkness….” If that isn’t a prayer of deliverance, I can’t be thinking straight!

Please note.  Each month’s news is prepared well in advance.
If events do not pan out as indicated we do not edit the news page to reflect such changes.

For the past few years with my husband, John, I have taken part in the Ride and Stride event, even in the Covid year. It is good to fix on an area and tour round all the open churches and chapels which you never normally see, and some of them have jolly good refreshments and we love eyeing up their renovations, kitchens etc and getting the low-down on what works and what doesn’t and their latest horror story about getting a faculty. We can always match those! Last year we had a feast of really disastrous noticeboards – I won’t tell you where we went. Look to your noticeboard!

We go on bikes, but you can walk and if you went to Shrewsbury there are a dozen churches open for you to see inside. ( Ride and Stride covers the whole of Shropshire, not just Lichfield Diocese). Or alternatively you can take a party in the car and explore churches in the wilds of Shropshire. The whole point is to be sponsored, (you should be able to access a sponsorship form from the website on the poster above or ask me for one) to raise money, half to your own church and half to the Shropshire Historic Churches Trust (SHCT). I have to say that SHCT has been very generous in its grants to Tong over the last 5 years, so what you give them you get back – and more. So, lots of little sponsorships, or a few big ones. It doesn’t matter how you go about it.

Please think about breaking the habit of a lifetime and joining in this year in one form or another. The list of churches open is on the website and most are open but it is annoying if you turn up and the building is closed, so worth checking first. Tong doesn’t get many cycling visitors because of the horrid A 41 and it is rather a long way from other places of worship, but quite nice to have a jaunt in the car!

Find out more at: www.shropshirehct.org.uk 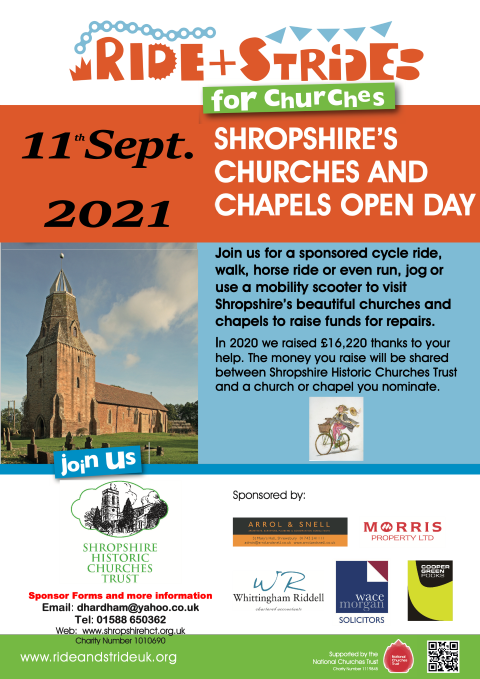 Please note.  Each month’s news is prepared well in advance.
If events do not pan out as indicated we do not edit the news page to reflect such changes.

Summer Holiday on the Isle of Coll

Last year I wrote for the magazine from Tiree, the westernmost island of the Inner Hebrides. Coll, much the same size, is next door, slightly north and east. Like Shifnal and Albrighton there is a certain amount of rivalry. Tiree is flatter, less rugged and able to harvest some crops as well as sustain cattle and sheep. It has a fair proportion of second homes and a population of 650 as opposed to 160 on Coll. Tiree boasts a flourishing wind surfing business because as well as having a high proportion of hours of sunlight, it also has a lot of wind! It has been interesting to follow up with Coll which is very rocky and where cattle, including the bull, and sheep with their lambs wander about rather like in an Indian market.

We have cycled all 29 miles of metalled road more than once. The single tracks don’t encircle the island but peter out into wonderful beaches. Coll also boasts a good hotel and yachts sail into the bay and the sea-dogs stoke up with good food and some pints, though all the days we have been here there has been no wind and a millpond instead of heaving brine, and some rather disgruntled sailors. The islanders pride themselves on their ability to work together and are rightly proud of the money they raised for a modern community building which they support by having a well-appointed bunkhouse adjacent where backpackers can stay for £12 per night.

The people of Coll as well as the visitors think this is the superior island! This is the home of Project Trust which’s sends youngsters overseas for a year to work in impoverished situations round the world. Several young people went abroad sponsored by the Trust when I was first worshipping in Shifnal, including the Vicar’s daughter. The first challenge is to find and get yourself to Coll! Last year Alice, who sometimes plays the organ at Tong, found it and was selected to work in China for 12 months, but Covid put paid to all that. Here there are otters, basking sharks, seals and corn crakes, though we haven’t been privileged to see any of them, but that might be because we don’t know where to look. The silence and the dark skies as well as the abundance of wild flowers are treats in themselves.

I love islands, having grown up about as far from the sea as it is possible to be, but now there aren’t many inhabited isles of any size round Scotland that we haven’t visited. They are a tonic to me and set me up to return to work.

Tong Church has everything!

We are able to offer a conducted tour of our famous, beautiful church. This ancient building was dedicated in 1410, and is held to be one of the finest examples of a church built in perpendicular style in the country.

Our tour lasts for about an hour, during which time you will see the famous Golden Chapel, our unique collection of magnificent medieval tombs and carved effigies. You can explore our historical links with Charles Dickens, William Shakespeare and not forgetting little Nell!

And, not for the faint hearted, try a tour of the tower. You will see one of the largest bells in the country!  Nowadays, due to Health and Safety concerns  regarding the very worn spiral steps and extremely limited space we only let visitors up the tower at their own risk and make them sign a disclaimer, but Bell ringing enthusiasts are often still keen to visit.

The Tong Vision for 2020 and beyond has a target to raise £500,000 over the next 3 years in order to fund urgent and essential restoration work, and to ensure that all visitors and congregations can continue to enjoy this unique building! If you can offer your support either financially, in-kind or otherwise, please contact Revd Pippa Thorneycroft.
pippa.thorneycroft@icloud.com
You can find us on Facebook: Tong Church
For Just Giving links, please see below.